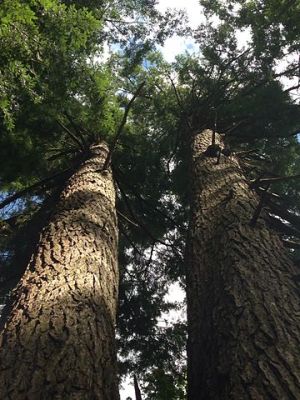 Until recent years, eastern hemlock trees (tsuga canadensis) have been an enduring presence in our cultural and natural environments. Hemlocks can grow for hundreds of years to more than 150 feet tall on trunks measuring six feet in diameter. They appear in poems by Robert Frost and Emily Dickinson. Forestry scientists will tell you that hemlocks are a foundation species which “define forest structure and . . . control ecosystem dynamics.” Pennsylvania designated it as the state tree and its page about its symbolism quotes A. J. Downing, “the father of landscape gardening in America,” as declaring the hemlock to be “the most picturesque and beautiful of the world’s evergreens.”

However, because of the hemlock wooly aldegid (HWA), an aphid-like insect native to East Asia and about 0.8 mm. in length, eastern hemlocks are disappearing in forests from northern Georgia to southwestern Nova Scotia. A 2015 alert from the National Park Service reported that as many as 80 percent of eastern hemlocks in Shenandoah National Park had died. A sad development for Bostonians, Hemlock Hill in Boston’s Arnold Arboretum is completely infested. 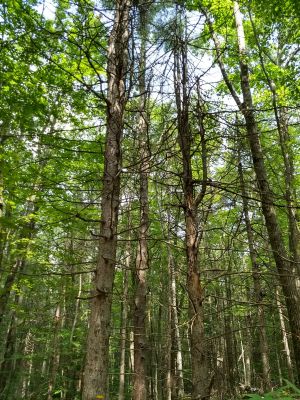 Stand of Hemlocks in Harvard Forest

[Note regarding this photo: Most of the eastern hemlocks in Harvard Forest are younger, hence thinner and shorter, than the giants shown in the first photo. That’s because a storm called the Great Hurricane of 1938 felled 70 percent of the standing trees in Connecticut, Massachusetts, and New Hampshire when it blew through the region.]

Scientific organizations around the globe are monitoring forests to identify critical factors behind dramatic changes in their composition and overall health. One such group is The Harvard Forest, a department of the Faculty of Arts and Sciences of Harvard University founded in 1907 in Petersham, Massachusetts. It includes a center located on 4,000 acres of land where scientists, students, and collaborators explore physical, biological, and human systems affecting the surrounding forest. An important part of its mission is to educate students and the general public about how these systems are changing over time. Scientists looking for causes of the eastern hemlocks’ dying have gathered data which point to global warming as the culprit. Aldegid mortality is 90% at 4 degrees below zero Fahrenheit which of course increases with even colder temperatures, but the area around Harvard Forest hasn’t been cold enough for at least a decade to keep the WHA at bay. Given this fact, the spreading demise of the eastern hemlock serves as a marker of climate change’s advance up the Atlantic seaboard as higher average temperatures become more common in the northern states.

When the Harvard Forest team recognized there was an urgent need to communicate this bad news to the public, they decided to combine art and science in a visual project that could both increase awareness and invite personal reaction. The result was Hemlock Hospice, a year-long interpretive trail through dead and dying stands of hemlocks along with twelve art installations by David Buckley Borden, Aaron M. Ellison and a group of interdisciplinary collaborators. It’s a great example of how artists, designers, and scientists can work together to enable us to see nature in the process of dramatic change.

I imagine that people’s reaction to the Hemlock Hospice varies from simple curiosity to deep sadness. Aaron Ellison, one of the creators behind the Hemlock Hospice project, experiences grief: “As a scientist, I study how our forests may respond to the loss of this ‘foundation’ tree species. As a human being, I cry, I mourn, and I look to the future of hope.” (Quoted on the WLA blog.) I found two of the installations particularly moving: the Hemlock Memorial Shed and the Exchange Tree. The Shed harbored a hemlock’s broken trunk. The Exchange Tree, modeled after a nearby fallen hemlock, had yellow dowels for branches from which reflections written on cloth tape could be hung. Both were like sacred shrines created to mark a beloved’s passing. Standing before them, I couldn’t help but reflect, meditate, pray.

[The photos below were taken during my and my wife Katie Lee’s visit last August.] 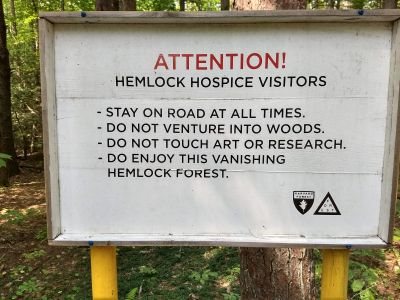 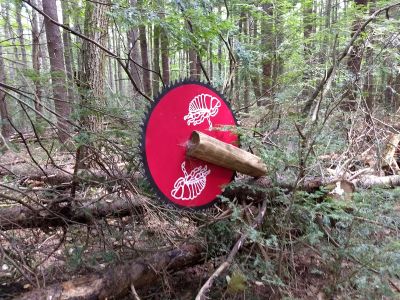 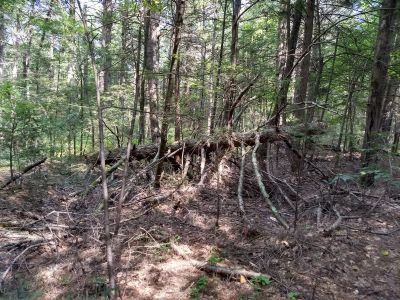 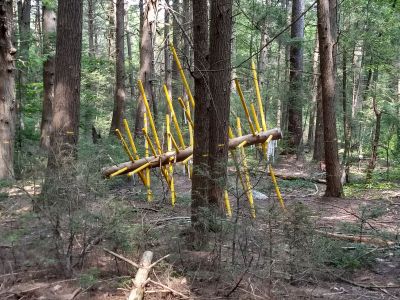 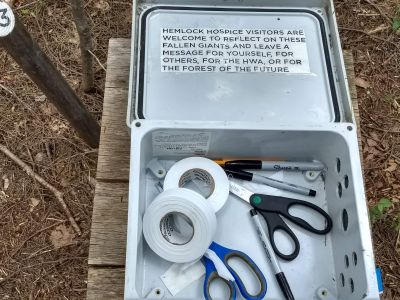 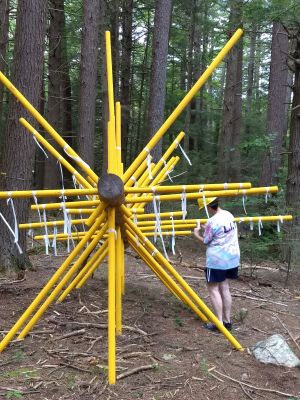 This entry was posted in Notes and tagged forest. Bookmark the permalink.

This site uses Akismet to reduce spam. Learn how your comment data is processed.